Bernbots are generic robots created in Bernkastel's image.They are different from pieces such as Furudo Erika, and are instead more weak and less autonomous like the Goats.

Bernbots were first introduced in Umineko: Stardust as a gag, but continued to become a mainstay in the series.

Bernbots have no personality, but they are programmed to say rude or funny things if they detect Bernkastel's mood.

Bernbots can shoot Class 1 weak red lasers from their eyes. They are also more powerful in groups, taking advantage of their power in number to overpower the enemy. 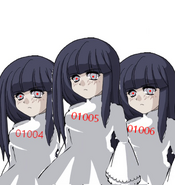 Example of a group of Bernbots.
Community content is available under CC-BY-SA unless otherwise noted.
Advertisement